I’m delighted to share the latest review of Stones in the Road: Poems of Grief and Growth

This collection of poems is Casey’s journey through difficult periods of grief.

Putting words down on paper can help in many situations, and here trying to cope with her loss, Casey is eloquent and honest. Her emotions fill the pages, and at times it is quite difficult to read. There are a range of emotions. Grief, anger, but at times also some hope that life can become more manageable again.

I believe that this collection of poetry could be a useful support for people in similar places of loss and grief. I’ve seen other accounts of illness and grief written as biographies and aimed at people going through the same things. They are selling well are getting their cause more exposure. I hope this book can do the same.

Mark Tilbury is a thriller and mystery writer, who blogs regularly at his website http://www.marktilbury.com. His début novel, The Revelation Room is available now. Further details can be found on his website.

I’m delighted to feature the latest review of Stones in the Road: Poems of Grief and Growth from Laura Perna, Director of Communications at the Coalition of Texans with Disabilities. END_OF_DOCUMENT_TOKEN_TO_BE_REPLACED

I added a couple of new reviews to the Stones in the Road page yesterday, so if you’re interested in finding out a bit more about my poetry, you can check those out. 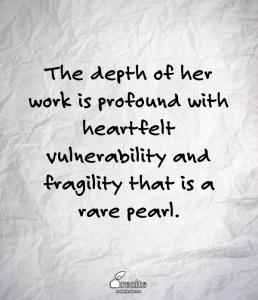 Click on the image above to get to the Readers’ Comments page, and maybe add your own if you have read Stones in the Road: Poems of Grief and Growth.

I’m also experimenting with Google+ and Pinterest as new ways to connect with friends and fans. You can find a link to my Google+ page in the sidebar on the right. If you’re on Pinterest, leave a link to your profile in the comments, and I’ll be sure to follow you back.

With each day that passes, the physical launch of Stones in the Road: Poems of Grief and Growth gets nearer. I am very much looking forward to the occasion, as it seems everything I have done up to this point has been building in that direction.  END_OF_DOCUMENT_TOKEN_TO_BE_REPLACED

I hope this post finds you well. I promised I’d write after the radio show, but I wanted to wait until you could actually hear it online. My unending gratitude must go to Tony Leamon, the presenter of the One and All show, and his colleagues Dave Youlden and Mike Chappell. All three went above and beyond the call of duty to make me feel welcome and make my ‘job’ as easy as possible whilst I worked with them.

I really enjoyed having the opportunity to discuss the motivation behind Stones in the Road: Poems of Grief and Growth with Tony, and sharing the two pieces I did.

Tony was very gracious and kind, and allowed me the space to say exactly what I needed to. Mostly, I came away feeling like I’d done my friends and myself proud. Raising awareness of and money for stage IV breast cancer is still near the top of my list of priorities, but in that context, doing my best by my friends was all that mattered. I am grateful to have had the opportunity to do so.

I also appreciated the music that was played either side of my appearance on the show. Probably through years of experience, but Tony has a real ear for songs and context.

I think I’ve kept you waiting long enough – nearly a whole post, so here’s the link to the podcast. I come in at about 39 minutes into the programme.

If you want to purchase your very own digital copy of Stones in the Road: Poems of Grief and Growth, please click on the link on the top bar. You’ll be taken to a page where there are both instructions for payment and downloading the book.

Feel free to let me know what you think in the comments. I’m always open to good conversation. Thanks so much for being a vital part of this journey. I’m sure I couldn’t do this if not for this little community.

I hope this post finds you well. I know I said I wouldn’t post until after the broadcast on Monday, but I wanted to afford you a glimpse of what happens inside a writer’s head when sitting on a coach for seven hours. The opening paragraph of the piece below was pecked out on my Kindle whilst travelling back from Somerset late this afternoon. I could have an ethical discussion about people watching, but I’m not entirely sure this is the place or the time. Feel free in the comments, though.

A woman sits, three rows ahead, in an Excel spreadsheet of a shirt. Green, purple and white, each “cell” clearly separate from the others. It’s a new one on me, and I don’t know what to make of it. I find myself hoping it isn’t a harbinger of trends to come. There’s no way I could wear something like that without somebody calling the Fashion Police. That being said, I am the last person qualified to comment on taste. Hitherto, my penchant was for check shirts which didn’t flatter, and the occasional dark blue number. Never a dress or a skirt…I would have to perfect levitation for a skirt to become even a remote possibility.

On the outbound journey, I studied the shirt intently, wondering what exactly must have been the motivation behind the design. It’s certainly quirky, and individual. I didn’t come to any conclusions, though…and after what felt like an eternity, we were finally permitted to disembark the coach. Four hours’ travelling is not fun at the best of times, pretty much regardless of the destination.
My other significant discoveries at this time were that reading whilst in motion does make me feel nauseous. Previously, I’d thought it didn’t…that I was somehow impervious to something that seemed to plague the rest of the non-driving population.
Hillary Rettig’s excellent book The Seven Secrets of The Prolific is well worth feeling nauseous for, though. I will write a longer review soon, after I have had a chance to digest and implement some of her thoughts.

If you want to hear more about Stones in the Road take a listen to Source FM this coming Monday, when I will be discussing the book and the story behind the project with the presenters of the One and All show from 9.30am BST. (Find your local time here.)

I hope this post finds you well. I’m enjoying the ride with regard to Stones in the Road at the moment. Seems to be taking on a life of its own.

You can hear the first mention of the book on Source FM here – from about 30 minutes in.

There is further news, however. I will be speaking about Stones in the Road: Poems of Grief and Growth on the programme at 9.30am on Monday 20th October. I’ll read a couple of poems, and speak a little about the book and the story behind it.

Meanwhile, if you’ve read and enjoyed the book, may I ask you to share the link with somebody who might enjoy it just as much? I’m also tweeting and posting on Facebook about the book, using the hashtag #stonesintheroad

It would be fantastic if any social sharing could use the same hashtag.

Thank you to all those who supported Stones in the Road on the first day. Seventeen physical copies have been pre-sold, and so far four digital copies have been sold. This is quite a ride. I must say that if somebody had sat me down seven years ago, and said ‘You can’t see the reason for this now, but one day you’re going to write a book out of this experience’ I would not have believed them.

As I watch things fall into place, and hear people’s kind words about the poems, I can do little more than bow my head in gratitude. It is a gift to be able to do this, and share some of the journey with you through the poems. Yesterday, I collected the first couple of physical copies, and I still can’t believe it.

I’ll post again on Friday, because there’s more news, and a date for your diaries.

Thanks for your support,

I hope this post finds you well. I wanted to write a few words prior to tomorrow’s big event.

Firstly, I want to thank all of those who have supported me on this journey, and offered a safe space for me to speak up when the road got rough.

On another note, I want to thank dear Chris, and Kim…wherever they may be. Without them, these poems would not be. There would be no reason for their existence.

Another vote of thanks goes to METAvivor, who have kindly allowed me to launch this project for their benefit.

I’ve received a lot of help to get this far with the project, and now both the local newspaper and radio are on board.

It is my sincere hope that the work reaches where it’s needed, and the funds make some difference to the currently less than favourable situation of Stage IV breast cancer.

I look forward to sharing the project with you at last,

I hope you are well. The past week has been a flurry of frenzied activity. Alongside starting my Masters in Professional Writing, I have begun the groundwork for a project which will be here sooner than you think.

All being well, I plan to launch the e-book Stones in the Road: Poems of Grief and Growth on the 13th of October. I chose the date as it is designated as Metastatic Breast Cancer Awareness Day. Metastatic (Stage IV) breast cancer is the only stage at which the disease is ultimately fatal.

Pricing information will follow, and I will explain the title and the story behind the project in two later posts leading up to the launch. I intend to sell the e-book to raise funds for Stage IV breast cancer research, donating all monies to METAvivor.

For further updates on the project, please like Stones in the Road: Poems of Grief and Growth on Facebook.

I’m also tweeting about the project.

If you’re interested in taking part in a promotional blog tour for the e-book, please contact me through one of the above means, or leave a comment below. I’m looking forward to taking you with me on this journey.

Unless stated, all work presented here is © Casey Bottono